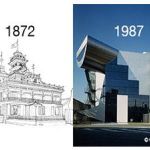 Explore traditional Japanese architecture and related political influences starting with the introduction of Western building styles in the 19th century to the influence of Le Corbusier in the mid-20th century.
Video Beginner Advanced
UPVOTE 0
SAVE THIS COURSE
Course Website
www.edx.org
Share this page
Other courses you might like

Examine how architecture reflects Japan’s history, starting with its emergence as a new nation in the 19th century and the building of the Western-style capital city of Tokyo on the foundations of Edo. New building materials and construction methods reflected changing times, and the radical contrast between tradition and modernism in the nation was clearly visible in Japan’s architecture and politics.

While experiencing intense Westernization pressures, Japan developed rapidly to rival the world’s great powers, we will look at how Japanese architects developed their own version of Modernism. Initially, Japanese wanted to pursue the discoveries of the Franco-Swiss Le Corbusier and of Walter Gropius at the German Bauhaus. But soon, Japan also began to produce its own 20th-century architects and develop its own style. Following World War II, Kenzo Tange became the first Japanese architect in history to achieve international fame.

In the last section of the course, we will present an interview-based case study titled “Exploring Tokyo Tech’s Twenty-First Century O-okayama Campus.” Tokyo Institute of Technology (aka Tokyo Tech) possesses its own unique and unbroken succession of practicing architects/professors, who design campus buildings. We will learn about Professor Kazuo Shinohara, one of the most prominent Japanese designers of the second half of the 20th century, and several of his renowned disciples from Tokyo Tech.

This course aims to illustrate the present state of Japanese Modernist and postmodern building, as well as the distance covered over the past 150 years, including the 130-year history of Tokyo Tech itself. Join us on this journey through time as we examine and admire Japan’s architecture to better understand Japanese history and politics.

Pricing:
Free
Level:
Intermediate
Duration:
6 weeks, 5h/week
Educator:
David B. Stewart
Organization:
Tokyo Institute of Technology
Submitted by:
Coursearena
Reviews
Would you recomment this course to a friend?
Discussion
There are no comments yet. Please sign in to start the discussion.
Other courses you might like